A labour of love and creativity

It certainly takes a special instrument to inspire such zeal in a seasoned music industry veteran like McCauley, and to spawn a dedicated film involving some of the greatest names in music. Down the Rhodes has been a true labour of love for McCauley, collaborating with “Rhodes player, Rhodes technician, and Rhodes collector aficionado” Benjamin Bove. “I’m very fortunate to be involved because I think it gave me an opportunity to employ the knowledge that I’ve acquired about musicians, about recordings, about so many of these players… I think that if others were doing it, they probably would have overlooked some of them. It’s allowed us to really make a deeper and wider connection with people that we’ve always admired and wanted to meet.”

As well as the original documentary film McCauley has published a book, and posts ‘webisodes’ on his website and a dedicated YouTube channel. He’s found no shortage of musicians keen to be involved and talk about their relationship with Rhodes. “I can’t think of any documentary that has as many luminaries and important people in music in one place, I’ve never seen that before.”

In fact he’s generated so much material that a second film is now in the offing. ‘Rhodes Travels’ will focus less at the instrument’s history and more at people uses of it and its role in their lifestyle: “I’ve met people after we’d finished the first film that I thought “you’re incredible”. I’m glad I discovered them and what they do with the instrument too. It’s exciting to talk to old and new and in-between, and just get their experience”.

McCauley’s enthusiasm spills over once again: “The Rhodes is just the starting point of a greater conversation really. I think what a project like this demonstrates is that music does connect us all. I’ve known people for twenty years or longer, and I didn’t really know that they played on certain records.  I didn’t know how they got connected to each other so there was a lot of information that I found out that was quite fascinating. It’s great because we get a sense of this multi-cultural set-up that music allows us to be a part of, it’s a big worldwide multi-cultural, multi-ethnic, experience and I think that’s what I’m very excited about. There’s so many artists that are of the current time and the current musical moment, they’re doing so much with instruments.”

For our Fender Rhodes aficionado, the project is a true work of creativity he feels privileged to have worked on: “I really believe that my entire lifespan is one day long and success has no evening curfew. I would say that as my day continues, I’m always creating. I feel very privileged that we were the chosen people [to make the film] because honestly I think there were other more qualified individuals.  I’m just happy that many Rhodes players, whether they’re famous or not, and everyone else in this film, has helped in making the Rhodes the cornerstone instrument that it is and will continue to be.”

And however successful his tribute, he knows he will never be bigger than the piano itself: “I can’t be arrogant or have an ego and think that I’m doing anything for the Rhodes piano. We can’t have that kind of attitude because the truth is the Rhodes has never gone anywhere, it’s been in every era, there have been countless recordings done that utilize the instrument. When new instruments come they say it killed the Rhodes but it doesn’t, it hasn’t gone anywhere, there’s just more instruments to choose from.” 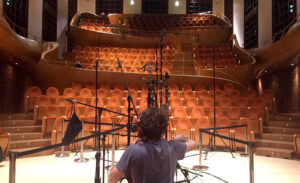